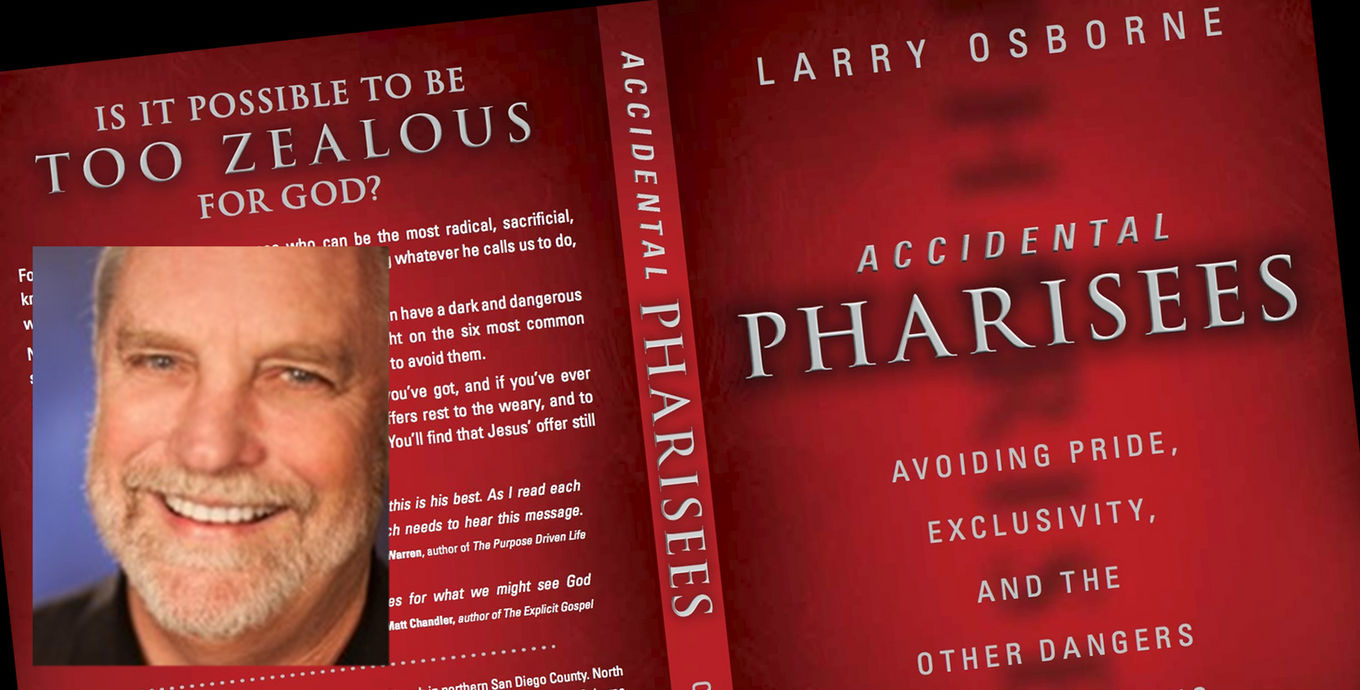 A while back I read Larry Osborne's much-needed dose of medicine for the Radical / Crazy / Not a Fan / Transformational / Young, Restless & Reformed (like me). Ouch. I needed that. It came at the right time and seemed to hit me in a number of soft spots that needed attention. I've since recommended it to quite a few people. Here is a brief taste of the book.

I Didn't See It Coming.

After a couple years soaking in preaching, teaching and books from the "reformed resurgence" movement I was on the brink of planting a new church. I went to work trying to kill my sins and experience the Living God through prayer and the bible. Like a kid who just downed a case of Mountain Dew I was bouncing off the wall, ready to unleash this energy upon the people of the city of Wyoming. I was fired up! Let's charge this mountain! The lost! There are so many lost people who need Jesus! Didn't you hear me? We need to do something about this...like now!

This calling on my life that was brewing for a couple years, simmering in Romans 12 and shortly there after confirmed by my church leaders, was very clear to me. I shared my vision and a few people outside church multiplication operatives were kinda, sorta enthusiastic'ish. But, largely, I was regularly feeling misunderstood (at best) and frustrated (most of the time). It's like they didn't see what I saw. And it started to tick. me. off (Osborne calls this "gift projection"). That's about when I picked up Accidental Pharisees (for the record, it was at the urging of some wise men of God).

You know the Pharisees right? The super-holy, religious people who knew all the rules? The ones with scowls in all the children's bibles? The ones who schemed to kill Jesus? Horrible, right? Well, it's scary how quickly one could be sucked into the same place as these dreaded people.

Of course, they weren't always seen as "the bad guys". They knew and trusted their bible. They followed the rules and made sure you did too. They hated sin and saw it everywhere. They came up with even more rules to follow just in case we wandered too close to the original rules. As Osborne says, "they were paying a price no one else was willing to pay."

Even Jesus pointed to their highly-respected spiritual fervor when in Matthew 5:20 He said, "For I tell you, unless your righteousness exceeds that of the scribes and Pharisees, you will never enter the kingdom of heaven." He was trying to demonstrate that, in Osborne's words, "God's standard of holiness is way beyond our best efforts."

They praised God. They loved His law. They sincerely wanted pursue Him. And that's a good thing...right? Well, yeah, of course, but when Jesus shows up and I don't recognize Him, don't like what He says or ignore Him outright then my pursuit is misguided and far off course.

You're NOT TRYING HARD ENOUGH!

Stopping sex slavery. Ending hunger. Eliminating AIDS. Celebrating diversity. Planting churches. There are so many wonderful causes a believer could invest in. But what about those believers who don't show up at the march on City Hall? What about the ones who don't change their Facebook profile picture to "raise awareness"?

It's easy for a Pharisee to consider those believers as heartless people who just don't "get it". When we set the bar extremely high it eliminates most people from participating. History is our witness: Of the millions of confessing believers throughout the ages there were a lot of regular Joes who did the best they could, got it wrong a lot, did some good and they are just as much part of God's family as the "radical" church planter who gave up a potentially lucrative career to start a new ministry in an area with high levels of poverty. Get over yourself Hall.

We could be horrified at seeing a believer settle for "good enough" when greatness is right around the corner (with only a few dozen major sacrifices thrown into the mix in order to achieve it). Suddenly our faith is so exclusive as to eliminate most people. My calling is probably not their calling. I also am drawn to some puritanical teaching which can lead me to beat myself up in an attempt to achieve great, personal piety. That makes me someone who needs to recognize that when Jesus calls the weak and weary to Himself, He offers them rest.

While it would be easy for me as a church planter to focus on those farthest from God (and yes, we love reaching those farthest from God) but when we read about the people Jesus spent time with it was not usually pagan people but, as Osborne says, people who thought they were "in" because they grew up in the church. They got enough gospel or Jesus to be okay despite their lives of sin. These people have a place at the table and need to be ministered to.

But it's these "lukewarm" Christians that really stick in the craw of a modern-day Pharisee. "Whenever our passionate pursuit of radically committed Christianity results in writing off or shooing away or otherwise taking it upon ourselves to spit out people who lag behind (even way behind), something has gone terribly wrong. We can no longer claim to be aligned with the heart of Jesus."

The middle section of the book was pretty timely given the recent best selling books for Christian leaders. Without explicitly calling out specific teachers, he does indeed call out some of their teaching. More helpful, he calls out the dangerous outcomes or side-affects of such teaching. Keep the passion, but left unbridled watch out for where it takes you.

He believes we Pharisees love litmus tests. And modern Pharisees are keen to have lots of tests. “If you’re passionate about justice, the needs of the poor, and orphans, you probably struggle with people who aren’t’. Your temptation to write them off as uninformed, selfish, or coldhearted. Don’t fall for it."

“If you live green, care for the planet, recycle, and ride your bike to work, you’ll be tempted to look down on those who don’t."

"A luxury car in the driveway or an expensive house to a 'radical' legalist is what a cold beer was to and old school legalist."

"'Missional' Pharisees see large church buildings and assume a watered-down gospel. o 'Gospel-centered' Pharisees use our theological grid to rule out fellowship with other believers outside our grid. This is straight up snobbery at its worst."

If drunkenness is sinful, then drinking is sin because it leads to drunkenness. Hard to argue since they are logical extensions of biblical commands. But when implications become commands we lose our freedom in Christ. Extra rules and fences destroy freedom. And freedom "drives the fledgling legalist within all of us crazy."

If freedom drives that little legalist crazy, then mercy most likely does as well. We like to crack the whip on wrongdoers who can't keep up. But as Jesus demonstrates, mercy isn't weakness and it's not compromise.

Accidental Pharisees is a very helpful little book. If you are a budding church planter or are considering ministry, read it. You'll thank me. You can pick up a paper copy or Kindle version here, starting at only $7.69. 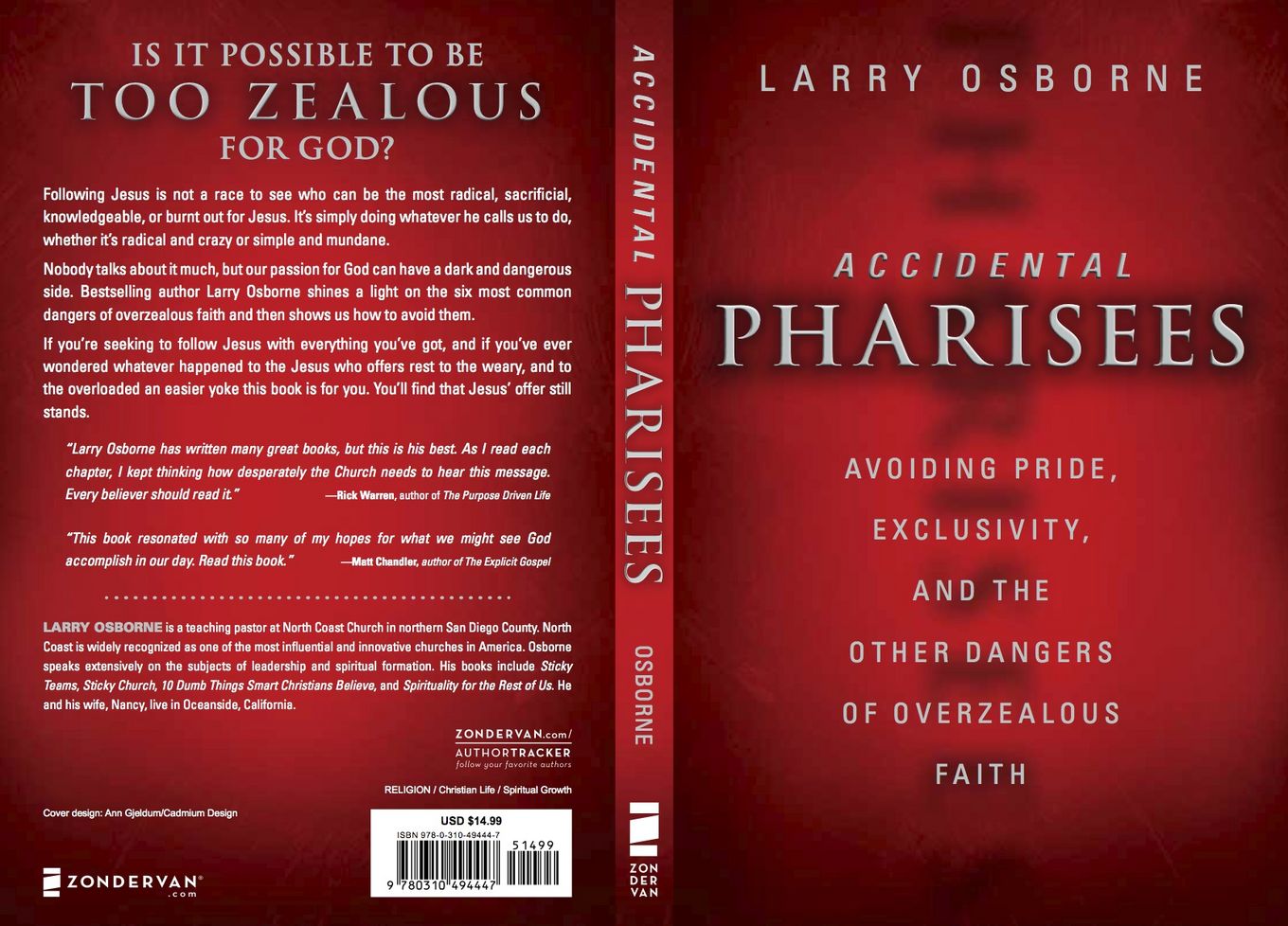 What Happened to Our Sunday Mornings?

What Happened to Our Sunday Mornings?

Volunteer of the Week: Ed

Volunteer of the Week: Breanna

Volunteer of the Week: Rocco

Volunteer of the Week: Tara

Volunteer of the Week: Mayme

No Thankfulness, No Multiplication?

What does it mean that we're a "church-planting church"?

What happens when we die?

"GOSPEL: The Story of God" is for you

Anyone else think this is weird?

A beautiful circus of crazies & freaks

So I Got This Postcard In The Mail...

*What if I already belong to a church?