November 8, 2015 Speaker: Chris Hall Series: What HE Said: A Guide for Living in the Kingdom of God

Monday nights Jenni and I host a missional community at our place. There are a lot of kids...err...Luci will remind me that there are a lot of boy kids. She's the "big sister" to a herd of younger boys.

Usually it's about 3 seconds into prayer time or 5 seconds after opening our bibles that there is a big "thud" and some yelling. We push through and keep rocking until there is a scream, crying or a door slamming. When I am the lucky one to head down to check on things I am met with a flurry of finger-pointing and a tidlewave of taddling: "He did it! He hit me! He won't share! He said Iron Man is stronger than the Hulk! He said I smell like cheese!"

I usually assume shared guilt, have them quiet down, play nice then I head back up.

One of the most memorable trips downstairs I heard two of them say "Let's play the punching game!" as I saw them with their shirts off. Not sure what the "punching game" is but I'm pretty sure it would not have ended well. 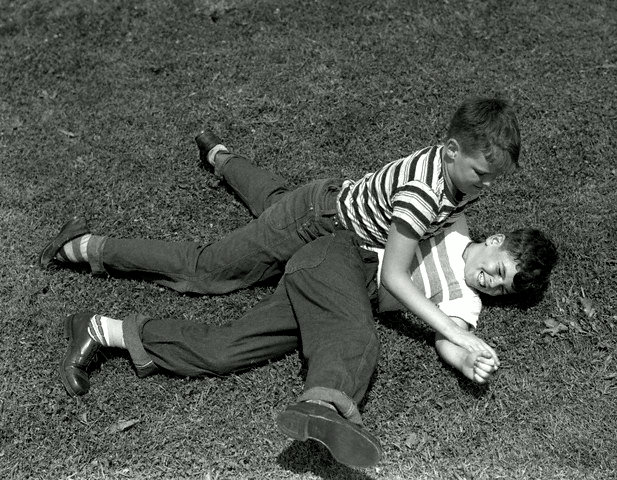 When we have two, sinful people in any proximity we have conflict. The more people, the closer the proximity, the more conflict. When they are young boys the conflict grows exponentially.

This is a problem since Jesus tells us that peace--not conflict--should reign in His kingdom. Sounds nice, but it seems like an impossible goal. Being a "peacemaker" doesn't come naturally for most of us.

We'd rather just split the boys up, send one in the play room, one upstairs, one outside to play basketball or something. When they aren't together, they don't fight! It's easier that way.

We extend that same line of reasoning to our faith and our homes too.

The world is full of sin. Christians have the fruit of the Spirit. I'd much rather hang around people who exhibit peace, love, joy, hope, etc than anger, pain, misery, hopelessness. It's easier. So we often recoil when we come into contact with lost people, we form our own church "cliques" and our own version of the world's offerings (music, movies, books, etc). I'm using "etc" a lot. Sorry for that.

Next thing you know, you can go most of your life with zero intentional moments of engaging a non Christian in ANYTHING resembling a spiritual conversation.

Inside the church we have people we just don't like. We disagree with how they do life, raise their kids, wear clothes, sing, whatever. We have plenty of reasons why we don't like someone. So we avoid them. If so and so is preaching we sleep in that Sunday. If they are hosting the thing we'll show up and leave. "I just can't worship if that person does X, Y or Z". The fruit of the Spirit isn't as evident in the lives of Christians as we'd like to think.

A lot of us in the midwest are especially good at passive-aggressive behavior, meaning we will smile at you and pretend all is well when we're actively avoiding that difficult conversation we know needs to happen.

When it comes to where we live, we'd rather avoid the messiness of living in an urban setting (financial/racial/ethnic/religious diversity, smaller yards, challenged schools) so we take out a huge mortgage and head out to where the lots are huge, the schools smell like fresh paint, and where the upwardly mobile white folks are moving (in herds). We know the problems in life are still present but they are masked by money so it feels safer. I can open the garage door, drive in, park, close the garage door and don't have to interact with neighbors. Ever.

Remember the boys downstairs fighting? Sometimes it's just easier to give them what they want. Here, take this candy, play this video game, whatever. Just stop fighting! We appease them for the sake of seeing conflict end. Then we head back upstairs. Well, that's what I did.

BLESSED ARE THE PEACEMAKERS

We aren't called to avoid conflict. We're called to make peace. Since we don't want to or don't know how to, then we need to seek outside help. Jesus gives us that.

[13] But now in Christ Jesus you who once were far off have been brought near by the blood of Christ. [14] For he himself is our peace, who has made us both one and has broken down in his flesh the dividing wall of hostility [15] by abolishing the law of commandments expressed in ordinances, that he might create in himself one new man in place of the two, so making peace, [16] and might reconcile us both to God in one body through the cross, thereby killing the hostility. [17] And he came and preached peace to you who were far off and peace to those who were near. [18] For through him we both have access in one Spirit to the Father. [19] So then you are no longer strangers and aliens, but you are fellow citizens with the saints and members of the household of God, [20] built on the foundation of the apostles and prophets, Christ Jesus himself being the cornerstone, [21] in whom the whole structure, being joined together, grows into a holy temple in the Lord. [22] In him you also are being built together into a dwelling place for God by the Spirit.

Verses 16-18 show that Jesus, at great cost, did the hard work of making peace: Between God and man; between Jew and gentile; and between even brother and brother. He took enemies of God, dead in our trespasses and gave us a seat at His table!

His work gave us all one Spirit, access to the One Father and buids us into a "holy temple in the Lord". Me made peace where there was only conflict. In light of that good news, how do we respond? Thankfully, He shows us how our ideas of peace are incorrect and offers a new way to live.

Spiritually speaking, the church is a group of people who, together, are the body of Christ and a holy temple who reflects the glory of God in a very dark world. He took foreigners and sojourners and gave us a purpose and a family--and an eternal home in a city: The city called "heaven"! We are meant to live in unity, together (That's where the word "community" comes from).

Jesus Himself left the perfect harmony of heaven and stepped into our messy basement, full of us with our shirts off playing the "punching game". We're a mess! And He moved into our neighborhood!

He saves us into a family and family are usually, you know, together. So when Jesus tells us to love our neighbors as we love ourselves, it sort of requires you to actually have neighbors.

A peacemaker does the hard work of making peace--in the basement with the fighting boys and in the church and in the world.

A peacemaker engages a lost and broken world, sharing and demonstrating the gospel where we've been planted. That also means we probably can make a big, Kingdom differenence in our own neighborhood through intentionally living as missionaries where we are. So instead of leaving for less diverse, less messy, more affluent pasture, peacemakers meet their neighbors, love their brothers and sisters-in-Christ, and find ways to be more open, honest and transparent with everyone they know. Doing the hard work of making peace in proximity to others.

Jesus didn't simply pay our debt for sin and take us from owing to net zero. Yes, He took us from being enemies to not being at war with God (Eph. 2:16). That's peace compared to conflict. But Jesus' peace is more than simply settling a debt. HIS PEACE IS ACTIVE and works for MORE PEACE.

Peacemakers aren't satisfied with a lack of conflict but instead work for justice and unity around the Word of God. Peacemakers look for new ways to glorify the Father in their neighborhoods and families.

When I get downstairs and see one, older boy pounding on a younger boy, I could simply let the younger one get what he "deserved" for taking the older boy's toy. I could watch that younger one get pummeled. And that would not be peace. It would be appeasement. Letting the older, stronger boy get what he wanted at the cost of the weak. That is evil.

Peacemakers know peace costs something: Comfort, time, money, energy, pride, a large yard or even having neighbors who don't wake you up in the middle of the night with fireworks. And yet peacemakers know the sacrifice is nothing compared to that of our Savior.

In short, thanks to what Jesus did we know who we are and how we are to live in His Kingdom. And when we press into that new identity as peacemakers, we are called "sons of God". Yeah, we may be sons, pounding on one another while playing "the punching game" but let's not forget we are sons indeed. And by living into our new identity as peacemakers, someday we know "the punching game" will only be a memory.

More in What HE Said: A Guide for Living in the Kingdom of God